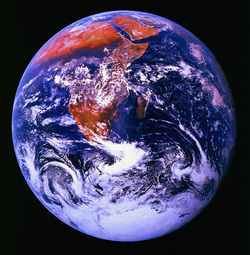 Earth’s climate has never been stable. Owing to the rising concentration of greenhouse gases in our atmosphere, it is warming now. However, other influences have caused it to fluctuate in the past, and to gain insight into the future of our climate it is critical that we understand its history. Efforts to reconstruct that past have had a western bias, owing in part to the substantial documentary legacy of European societies and their colonial descendants. Moreover, the modern interdisciplinary pursuit of historical climatology first emerged in Europe, and efforts to understand the European climate have received impressive government funding.

In recent years scholars across the globe have begun to address that imbalance. As the consequences of global warming grow increasingly obvious, international programs like the Past Global Changes (PAGES) project have gathered interdisciplinary researchers into teams dedicated to particular regions, epochs or methodologies, in the quest for a comprehensive picture of past climatic variability. A new article in the journal The Holocene presents the results of one PAGES initiative, which exhumed sources from the full breadth of Africa to incorporate the continent within the global climatic record.

Because so much of Africa is arid or semi-arid, studies that investigate African climates have generally reconstructed rainfall, with an eye toward the frequency and consequences of drought. The international scientists of the PAGES Africa2k project, however, explored long-term temperature variability across the continent by employing “proxy” records from lakebeds, pollen deposits, cave speleothems, ice cores, boreholes and even surviving documentary and instrumental evidence.
However, the last two centuries provide a much less ambiguous narrative. Nash explained that “documentary evidence from southern Africa suggests that, apart from a run of severe winters following the eruption of Krakatau, cold seasons became progressively milder over the course of the nineteenth century.” Both instrumental data and geological proxy records confirm sustained warming since 1880, with little regional variation. More recently, the signal is even stronger. “Most available records confirm continuous warming since the 1970s,” Nash said, “with temperatures in the last two decades in East Africa some 1-2 degrees Celsius warmer than during the Medieval Climate Anomaly.”

Of course, there are limits to the new data, some of which reflect the very issues that contributed to that western bias in our understanding of past climates. Most importantly, many of the geological proxy records most useful for reconstructing African temperature variability were also affected by shifts in average annual precipitation. Moreover, the majority of these “palaeoenvironmental” records were derived from Southeast Africa, and the distribution of modern instrumental records is equally uneven both in time and space. Networks of meteorological stations will need to be maintained, and there is pressing need for data that can inform temperature reconstructions of north and West Africa. Still, the scientists of the Africa2k initiative have contributed enormously to the quest for a truly global understanding of how our climate is changing.