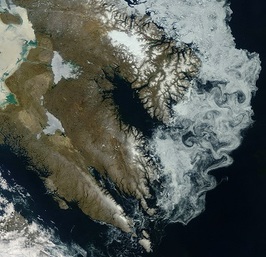 At the beginning of the Holocene roughly 10,000 years ago, 9% more sunlight reached the Northern Hemisphere than today. Very gradually, less solar radiation warmed the far north, and regional temperatures started a lengthy decline. However, at the turn of the twentieth century that trend reversed sharply, and warming has accelerated since the 1970s. Recently published in the journal Geophysical Research Letters, a University of Colorado Boulder study by lead author Gifford Miller applies radiocarbon dating to new sources in a quest for more accurate reconstructions of these climatic shifts.

Gifford and his co-authors travelled to Baffin Island, the largest island in the Canadian Arctic. The massive ice caps on the highlands of Baffin Island are frozen to relatively flat terrain, which prevents them from flowing and preserves the ancient landscape in which they formed. Changes along the fringes of these ice caps therefore reflect changes in temperature rather than other environmental conditions. The researchers collected dead tundra plants within one meter of four ice caps that are now receding by two to three meters a year.

Radiocarbon dating revealed that the moss had been exposed to the elements for the first time in approximately 50,000 years. In other words, ice caps on Baffin Island cover less ground today than they have since the emergence of modern human beings. Because radiocarbon dating loses accuracy when samples are older than 50,000 years, Miller and his co-authors employed ice cores exhumed from the Greenland ice sheet to determine how unprecedented modern warming really is. The results reveal that the Arctic is warmer now than it has been for at least 120,000 years. Previous University of Colorado Boulder studies demonstrate that average temperatures on the Greenland ice sheet have warmed by almost 4° C.

The new study by Gifford and his team has received substantial media attention for these findings. However, it also has another, less alarming conclusion. Radiocarbon dating of the newly available tundra plants also revealed that Arctic temperatures declined by 2.7° C in the 5,000 years before 1900. This remarkable fall doubles what was projected by CMIP 5 climate model data, suggesting that the model may need revisions. Since computer simulations based on climate models provide our best guess for the shape of future warming, research that reconstructs past climates has never been more relevant.