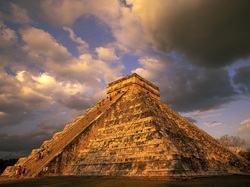 For seven centuries the Classic Maya dominated central America, developing a unique society that in its complexity rivalled the greatest civilizations of contemporary Asia or Europe. For over three decades some scholars attempted to link the gradual collapse of Mayan population centers between 800 and 1000 CE  to sustained drought influenced by a change in the regional climate. However, their conclusions remained controversial, in part because climatic reconstructions compiled using paleoclimatic records were not yet sufficiently precise. More recent articles supported the drought hypothesis for the collapse of Mayan Civilization, but environmental circumstances like human-caused deforestation complicated attempts to piece together what happened near the most important cities of Mayan antiquity.

A new study by an interdisciplinary team of scholars published today in the journal Science  has received significant media attention for attempting to resolve the controversy. The team first used stalagmites from a cave located near major Mayan centers to develop a regional climatic reconstruction of unprecedented precision. Stalagmites rise from cave floors when water drips from the ceiling, and have been reliably used in many recent climatic reconstructions. Using the stalagmite reconstructions, lead author Douglas J. Kennett and his colleagues revealed that the zenith of Mayan civilization corresponded with centuries of unusually high precipitation. On the other hand, it was framed by periods of prolonged drought, with rainfall already diminishing by 640 CE. To link periods of drought or enhanced precipitation with developments in Mayan Civilization, the authors used Mayan stone tablets recorded by the Maya Hieroglyphic Database Project and compiled by linguist Martha Macri. Monuments described increased warfare and political fragmentation during the initial decades of drought, then dwindled as climatic conditions worsened and population centers were abandoned.

While the new study is persuasive, the Mayan records all contain one critical omission: none mention the weather! This is acknowledged by the authors, and it certainly does not fundamentally discredit their conclusions. Still, it does mean that some controversy will probably always surround attempts to find relationships between climatic trends and the political chaos that marked the end of classical Mayan civilization. It also raises some interesting questions: were Mayans aware that their climate was changing? Could they conceive of such a thing as "climate," and if so, how? Did their manner of recording history help or hinder attempts to chart climatic trends?

Different sources impose different limitations on researchers exploring climate in different geographical regions, at different times. That, of course, is part of what makes climate history and historical climatology so interesting.