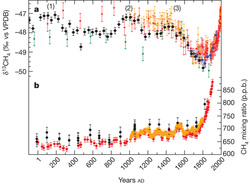 Above: carbon isotopes. Below: methane.
Using new data from the NEEM and EUROCORE ice core drilling programs, researchers from the Niels Bohr Institute have published a study in the journal Nature that reconstructs how different natural and anthropogenic activities contributed to methane emissions over the last two millennia. An important but frequently ignored greenhouse gas, methane is released into the troposphere from three sources: biogenic (wetlands or rice paddies, for instance), geological (for example, mud volcanoes) or pyrogenic (including biofuel or coal burning). Different methane sources have different isotopic signatures, meaning that scientists can use ice cores to trace how and why methane rose and fell over time. Previous studies of carbon isotopes in Antarctic ice cores suggested that the contributors to methane emissions that likely resulted from human activity - like biomass burning - exceeded what was expected for preindustrial conditions.

This study, which has received significant media attention, might have benefited from the contributions of an environmental historian to nuance some of the claims made about, for example, the relationship between human activity and woodlands. Nevertheless, the study's conclusions dovetail nicely into the arguments of recent papers that explore the possibility of anthropogenic climate change prior to industrialization. While some of that work remains controversial, it's safe to conclude that many of the environmental problems of the present are  caused by drastic changes in the scale - not necessarily the kind - of our environmental relationships.