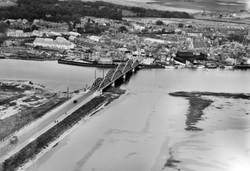 Two new studies in the journal Climatic Change explore relationships between extreme weather events and socio-cultural responses in early to mid-twentieth century Britain. Increasingly, projections of a warmer future and its ramifications have prompted interdisciplinary scholars to contribute the insights of ever more diverse disciplines to the quest for a better understanding of how life - especially human life - copes with climatic fluctuation.

Consequently, the first article, by Mike Hulme of the University of East Anglia, considers how to make sense of climate in different disciplines by examining cultural responses to a heatwave that lingered over Norfolk in July, 1900. Hulme describes how the heatwave can be traced in three different worlds unlocked by three different disciplines: that which was imagined by contemporary author H.P. Hartley, that which was lived historically in Victorian Norfolk, and that which is quantified by climate scientists. Ultimately, to Hulme conceptualizing "climate" and its influences in a concrete sense is harder than we might think.

Meanwhile, the second article by lead author C.A. Jones of Sea Engineering, Inc. uncovers patterns of social resilience and vulnerability in Wales during the severe winter of 1946/47. Focusing on Cwm Tywi, a community of upland sheep farms, Jones and his fellow authors reveal that even though the community coped well with heavy snowfall compared to more urban centres, its inhabitants still abandoned their homes owing to the emotional distress caused by loss of livestock. The study employs oral histories, documentary evidence and interviews to demonstrate that for the inhabitants of Cwm Tywi perceptions of extreme weather, funneled through the lens of the community's isolation, were as important as the actual material consequences of what weather. Ultimately, both articles, written from the perspective of different disciplines inside and outside of academia, suggest that the past, present and future influences of weather and, in turn, climate are never straightforward.