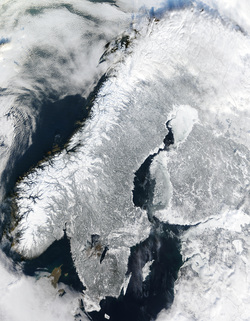 A team of researchers under Jeremy Shakun have published an article in the journal Nature that explores the relationship between atmospheric carbon dioxide and the world’s climate as the last great ice age came to an end. By looking at the distant past, the study reveals that the rise in carbon dioxide that accompanied this rapid shift slightly preceded increases in global temperature.  “At the end of the last ice age, CO2 rose from about 180 parts per million (ppm) in the atmosphere to about 260; and today we’re at 392,” Shakun explained. “It’s not a small amount. Rising CO2 at the end of the ice age had a huge effect on global climate.”  This finding appears to contradict an earlier article that relied on an analysis of Antarctic ice to conclude that changes in Antarctic temperatures actually preceded fluctuations in temperature.  By suggesting that the link between changes in carbon dioxide concentrations were more loosely linked to shifts in global temperature, the study provided fodder for global warming sceptics. However, the new study’s more comprehensive analysis of the past, incorporating data from all over the world, undermines the hopeful findings of the previous article.

By using sources from ice cores to plankton buried in sediment, Shakun’s team developed an explanation for both Antarctic and global records. Warming was first stimulated by the Milankovitch “wobble,” a minor shift in the nature of the Earth’s orbit around the sun that exposes the north to more sunlight and triggered the collapse of major ice sheets. The torrents of fresh water that accompanied the melting of the hemisphere’s ice upset the North Atlantic’s ocean circulation, rebounding the heart welling up from the equator and warming the South. That triggered more changes to atmospheric and ocean circulation, releasing carbon dioxide from the Southern Ocean and, in turn, stimulating a sustained global rise in temperature that culminated in a much warmer climate. This critical and alarming study has received significant media attention, but it remains to be seen whether its findings will inspire changes to national and global environmental policies.