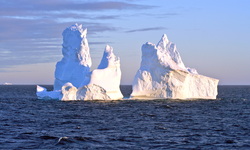 As published in the Journal of Geophysical Research, a team of scientists led by Colin Morice have updated HadCRUT, one of the three major global temperature records used by climatologists. Compiled by the Hadley Centre of the UK Met Office and the Climatic Research Unit at the University of East Anglia, HadCRUT dates back to 1850 and relies on direct observation. Although the previous version was plagued by a lack of Arctic sources, the new record fills that gap by using observations from over observation stations across the rapidly warming Arctic. Meanwhile, the more accurate electronic sensors ships now use to detect sea surface temperature revealed a systematic anomaly in the way data was collected in the past. Differences in buckets used aboard ships and variations in the locations where data was collected have were corrected as scientists recalculated the older data. However, while HadCRUT is now more accurate and more comprehensive than ever before, the bottom line remains unchanged. As described on BBC News, the new version agrees with the old in recording a warming of 0.75C (1.4F) since 1900.