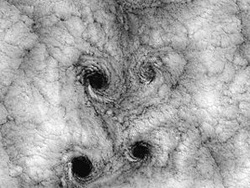 A new paper by S. D. Outten and I. Esau in the latest issue of the journal Climatic Change has supported recent studies suggesting that the rapid melting of polar ice, caused by the warming of the Arctic, can cause a decrease in zonal wind over Europe. By funnelling warmth from the Atlantic, persistent westerly winds are largely responsible for Europe's relatively mild climate. Hence, decreased zonal wind stimulated by global warming can actually cause the continent to cool. The world's temperatures are rising - indeed "global warming" remains  a better term to describe the current climatic crisis than "climate change" - but Outten and Esau have highlighted how the new climatic regime of the coming century will mean different things for different societies. By uncovering links between changing patterns of prevailing wind and climatic fluctuations, the study also has potentially important ramifications for researchers exploring relationships between human and climatic histories.