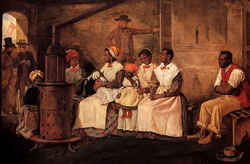 In a recent book, a paper in the journal Climatic Change, an article in The Guardian and another in Active History, historian Jean-François Mouhot of Georgetown University has popularized the idea that there are links between past slave societies and today's fossil fuel economies. Meanwhile, James Hansen, head of the NASA Goddard Institute for Space Studies, has recently received significant media attention for similarly suggesting that climate change is a moral issue on par with slavery. Mouhot is careful to admit that there are important differences between slave and fossil fuel economies: while slaves suffered directly, the human toll of global warming, while increasingly severe, is nevertheless indirect, removed from those who cause it. Then again, Mouhot concedes that the desire to injure or dehumanize hardly accompanies the burning of fossil fuels.

Still, to Mouhot slave and fossil fuel economies are linked in their shared dependence on an ostensibly nonhuman labourer - whether slave or  machine - to do the dirty work. Just as many American politicians, representing slave economies, rationalized slavery in spite of their new republic's supposed commitment to equality, today's policymakers ignore the scientific consensus about global warming because the cost of taking action seems too high. Mouthot argues that, "pointing out the similarities between slavery and the use of fossil fuels can help us engage with the issue in a new way, and convince us to act, as no one envisages comfortably being compared with a slave-owner." Mouhot's comparison can also offer a roadmap for change, and he describes how the abolitionist movement succeeded by using an incremental approach that can offer lessons for environmentalists today. Ultimately, however, slavery would not have been abolished without the industrialization that swapped human slaves for their mechanical equivalents, and Mouhot concludes by calling for new investment in "green" technologies.

Historians typically lend insight to issues in global warming research by reconstructing changes in past climates before describing and conceptualizing their relationship with human history. Mouhot has taken a very different approach, comparing the parasitic elements of economic systems across time to challenge our understanding of today's polluting economies. Environmental historians might also consider how both slave societies and fossil fuel economies transformed and homogenized their environments on a gigantic scale. Either way, Mouhot's provocative work has presented new methodologies for those interested in the study of past, present and future climates.