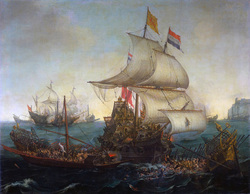 The latest issue of the Proceedings of the National Academy of Sciences contains an article that appears to link climatic fluctuations with European "golden" and "dark" ages in the early modern period. According to the authors, climatic cooling directly causes economic decline, which, in turn, leads to warfare, turbulence and, supposedly, "darkness." In reality, it's articles like these that highlight the need for interdisciplinary cooperation in all areas of climate research, perhaps especially those that look into the past. As described by historian Sam White, the article never actually explains exactly how these connections work, precisely because it uses methodology that historical climatologists abandoned decades ago.

Climate change never directly causes human history, because climatic fluctuations are only one complicated influence among the many that colour the relationship between human societies and their environment. That understanding, vital to historical climatology, is also important as we consider our warmer future. Conflict may intensify in the coming century not because a hotter climate determines it, but because many economic, political and cultural structures in today's world contribute to global warming while exacerbating its most problematic influences.